SEB – a leading Nordic corporate bank – have confirmed they expect the British Pound to maintain an upside bias against the Euro.

SEB have backed the Pound over the Euro since the start of 2021, recommending a number of trades through the course of the year that relied on a view that EUR/GBP “would head lower”.

In a new strategy update released mid-month SEB say they “once gain believe in the downside”, citing the likelihood of a Bank of England interest rate rise being delivered in 2022.

The UK’s rapid approach to vaccinations allowed the market to focus on the currency’s “cheap valuation and prospects for recovery”.

The next driver for any further gains in the Pound lies with the Bank of England, says SEB. 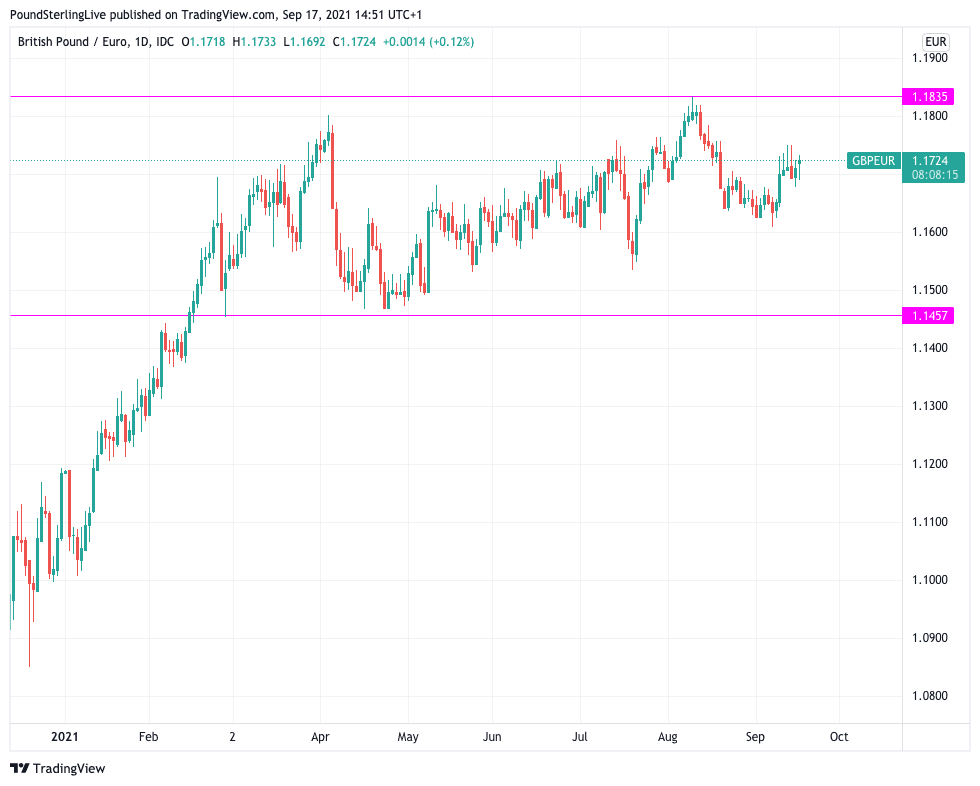 FX transfers: Secure a retail exchange rate that is between 3-5% stronger than offered by leading banks, learn more. (Advertisement).

They expect the Bank to “cautiously hike its key rate in May 2022 and stop its quantitative easing programme ahead of time in November, “which should lend GBP further support.”

The key event for the Pound over coming days will be Thursday’s September policy meeting from the Bank, where no changes to policy are expected but guidance could prove important.

In particular, the vote composition of the Monetary Policy Committee on 1) ending quantitative easing and 2) raising interest rates could send a signal to currency markets.

Consensus expects a rate rise in the first half of 2022 but that the quantitive easing programme would complete as scheduled in December, therefore SEB’s call for a vote to cease the programme in November would prove a ‘hawkish’ surprise that could support the UK currency.

A first-quarter 2022 rate hike would put the Bank ahead of the European Central Bank and U.S. Federal Reserve, bestowing a potential upside benefit to Sterling exchange rates.

“As the market has rewarded currencies with central bank support, we expect EUR/GBP to resume a clearer trend lower targeting 0.83 and would stop the trade on a break above July highs at 0.8650,” says SEB.

However, while the Bank of England can be a source of support for the Pound there is a risk any delay to the timing of a rate rise could trigger an unwinding of recent strength.

Analysts at Capital Economics say that while UK inflation is burning hot it will fall rapidly in 2022, easing pressure on the Bank to raise interest rates.

Capital Economics anticipate the first rate rise to only be delivered in 2023 which would amount to a material disappointment to those bidding the Pound higher.

Stefan Koopman, Senior Macro Strategist at Rabobank, says the Bank of England would risk making a “policy error” were it to raise interest rates as early as May 2022.

“As inflation surges, calls for a relatively early Bank of England rate hike are growing louder,” says Koopman, “the increase in inflation has been driven primarily by (global) supply bottlenecks, an unusual consumption bias, and low levels of inventories.”

“This is not a normal business cycle, and it shouldn’t be interpreted as such,” he says.

Rabobank’s strategy team don’t see any urgency for the MPC to spell out the exact conditions under which it would contemplate raising interest rates, but might just do that in order to retain credibility with the market.

“After last year’s accusations of fiscal dominance, they might have a particular interest in convincing the public that it is still, after all, a central bank determined to fight off above-target inflation. The risk of a policy error is therefore elevated,” says Koopman.

Rabobank’s foreign exchange strategy team meanwhile says “GBP may still have plenty of headwinds to face in the coming months.”

However, the better-than-expected employment figures out last week see them maintain a year-end forecast of 1.19 for GBP/EUR.