Described as the first ‘carbon positive’ upgrade to the rail network, the station has benefited from an investment of Â£ 7.5million.

In addition to a new station entrance improving access to both Maudsley and King’s via a second entrance via Windsor Walk, the station acquired new public works of art showcasing the history and culture of Camberwell, more waiting facilities, sheltered platforms, advanced solar power and a secure cycle parking lot.

It is the first station in Europe to be equipped with BIPVco’s Flextron thin-film solar technology.

Only 3mm thick and 3kg per m2, flexible solar panels are highly advanced, self-cleaning and generate high energy efficiency even in shade and shade

One of the main objectives of the improvements is to improve the flow of passengers and reduce congestion at the station; one of the busiest in the UK and improve service reliability.

While cutting the ribbon, Heaton-Harris said: â€œThis upgrade turns a Victorian station into a modern experience for passengers – reducing clutter, improving access and introducing new space for cyclists. and works of art.

â€œMaking this new Denmark Hill extension the first ‘carbon positive’ upgrade using innovative solar technology also demonstrates our ambition to ensure that our rail network is greener for passengers and better for our environment. “

â€œThe new upgrade is highly sustainable, using solar power solutions that actually produce more electricity than the station upgrade needs, so we can put electricity back on the grid. network.

â€œWe were able to complete this project on time and on budget despite the impact of COVID, and it is a testament to our relationship with Govia Thameslink Railway, Camberwell Society and The Salvation Army for loaning us a part. of their site for the works. “ 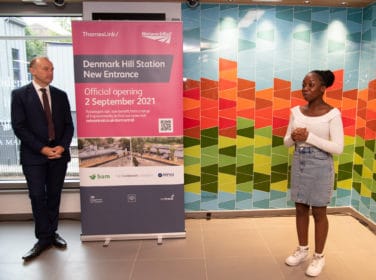 Danielle Arthur-Kennedy read the poem featured on the new station

The station’s new public art includes a work by British Ghanaian artist Godfried Donkor, a poem by Una Marson – the first black woman program maker at the BBC and former resident of Camberwell – and design elements that make a nod to the history of Camberwell.

One design motif is ‘Camberwell Brick’, in the color palette drawn from local greenery, architecture, water and sky to form a Camberwell cityscape.

Designed by local design consultancy Studio Sutherland, the brick was inspired by the well that features in Camberwell’s name, history and coat of arms.

Network Rail also used the brick shape for the white tiling to complete the entrance.

Actress Daniella Arthur-Kennedy of the Peckham Theater, who read Marsden’s poem at the opening of the new entry, said: â€œUna Marson was a Jamaican feminist, activist and writer, who inspired so many with her writing and its character.

â€œShe was the first black woman producer to be employed by the BBC and has shown genuine commitment despite inequality and injustice.

â€œHer desire to help West Indian children and soldiers who returned from WWII shows how selfless and empowering she was.

â€œUna’s work inspired not only people of her time, but people today as well. She is truly an inspiration to me and to many others.

Nick Mair, President of the Camberwell Society, said: â€œWe are delighted with the collaborative experience of this project. Working with Network Rail, the project team and the Camberwell community, we have created a unique welcome at Denmark Hill Station reflecting the history and culture of Camberwell.

Camberwell Identity Group President Kelly Blaney told The News: â€œWe have been working closely with Network Rail since March 2018 and, through ongoing community consultations, the new artistic and design elements have created a unique identity for our station and continue to enrich our history as a cultural hotspot.

Local resident Sandi Toksvig, who was present at the inauguration, said: â€œCamberwell is a culturally diverse neighborhood with a rich history, and the new entrance to Denmark Hill station gives a hint of what makes it a great place to be. to live and work.

“I hope those who use the station feel inspired to further explore the area and experience Camberwell life.” 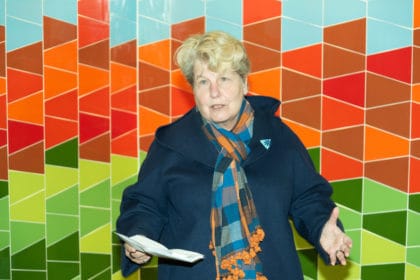