Nordic lender and investment bank Danske says they hold a bullish Pound to Euro exchange rate forecast on an expectation the Bank of England is to soon begin tightening monetary policy.

“We expect the UK recovery to continue although delta still creates uncertainty about the outlook,” says Jens Nærvig Pedersen, Chief Analyst at Danske Bank. “We remain bullish on GBP”.

The call comes a day after the ONS reported the UK economy returned to growth in August, helped by a boost to industrial production and expansion in the all-important services sector.

It also comes as the Pound-Euro exchange rate attempts to break above the 1.18 level, a feat it has so far failed to accomplish despite five successive days of trying: 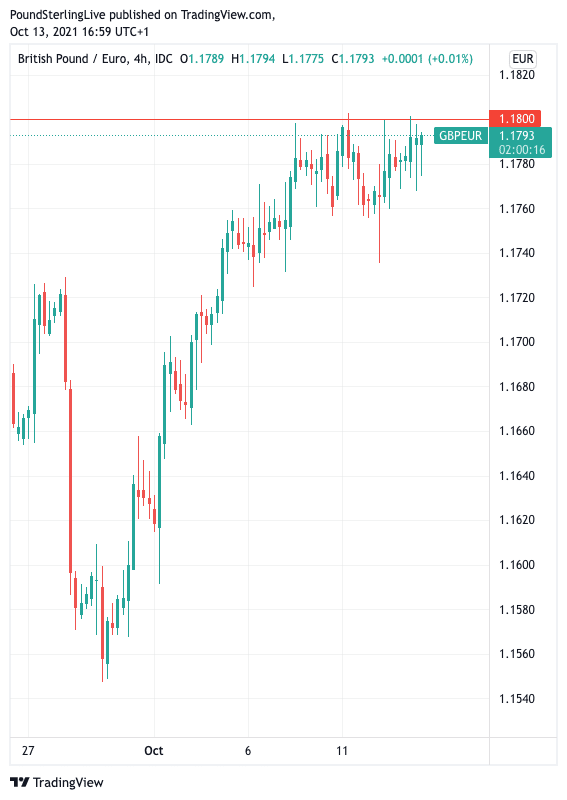 FX transfers: Secure a retail exchange rate that is between 3-5% stronger than offered by leading banks, learn more. (Advertisement).

Rallies in the Pound continue to be sold into around the 1.18 level, courtesy in part to the significant amount of orders layered around this round number.

A break above 1.18 could well open the door to cleaner air until the next round-number resistance at 1.19, although alert orders set with Pound Sterling Live suggest 1.20 is the next major level of interest for deliverables market participants.

From a fundamental perspective Danske Bank are of the view that all the above-mentioned levels will ultimately fall over the duration of the coming 12 months.

Nevertheless progress could be slow for those watching the market for higher rates.

Likewise, it offers some breathing space to exporters and those looking to bring funds into the UK.

Analysts are of the view the Bank of England’s move towards raising interest rates is the single most important factor in driving demand for the Pound at present, although some argue the Bank is at risk of making a mistake by raising rates.

The argument goes that raising interest rates when the growth outlook is subdued could in fact hamper future growth, making the Bank of England guilty of committing a policy mistake.

Money markets suggested as of Wednesday afternoon there were was a hefty 100 basis points of hikes lined up for the UK between now and the end of 2022.

Such a hike in the cost of borrowing when the growth outlook is subdued could in fact hamper future growth, hence the Bank of England could stand guilty of committing a policy mistake.

“There is no shortage of commentators, including ourselves, warning that this pace of rate hikes in the UK could place too much of a burden on the consumer in the current environment,” says Jane Foley, Senior FX Strategist at Rabobank.

But Danske Bank see the Bank of England rate hike story as a supportive one.

“Like the Fed, the Bank of England (BoE) is about to start tightening monetary policy. QE bond buying is set to end by the end of the year and since our last update, investors have started to price in more aggressive rate hikes from the BoE,” says Pedersen.

Danske are also bullish on the Dollar’s prospects as they see the Federal Reserve raising interest rates in 2022.

“We remain bullish on GBP as the USD-positive environment is usually also benefitting GBP,” says Pedersen.

Danske Bank forecast the Euro-Pound exchange rate to move lower and they hold a point forecast at 0.83 in 12 months. 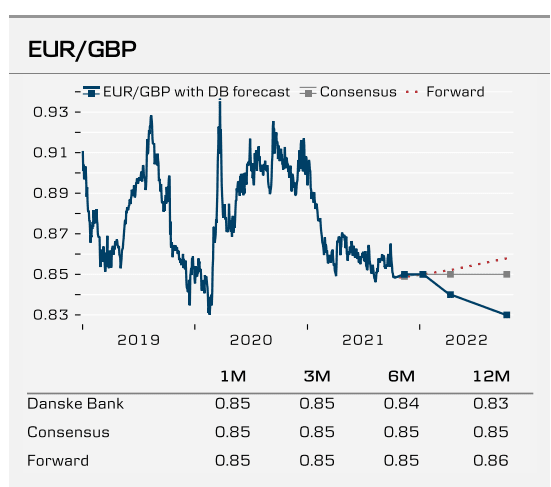 Above: EUR/GBP outlook from Danske Bank.

Pedersen says a risk to the forecast is a hit to global risk sentiment and/or if Bank of England keeps monetary policy accommodative for longer than currently expected.

This reflects the Pound’s sensitivity to substantial stock market sell-offs where the likes of the Euro and Dollar tend to benefit from repatriation flows.

Recall, the all-time low in GBP/EUR came not after the Brexit vote but during the 2008 financial crisis.

Regarding the issue of surging UK inflation, Danske Bank says the impact on the UK could be more acute than for the Eurozone.

Another potential concern for the Pound is that EU-UK tensions increase.

The EU and UK are currently laying out their stalls ahead of further negotiations on the issue of the Northern Ireland protocol, where failure to arrive at a consensus could see the UK trigger Article 16 of the protocol.

This would effectively allow the UK to autonomously suspend elements of the agreement, thereby raising risks of retaliation from the EU.

“It is increasingly expected that the UK will trigger Article 16 over the NI protocol,” says Marek Raczko, an analyst at Barclays.

“Such actions can impact the wider Trade and Cooperation Agreement (TCA), trigger retaliation measures by the EU, including tariffs or the suspension of parts of the treaty,” he adds.

“Any of the above is likely to significantly weigh on GBP,” says Raczko.